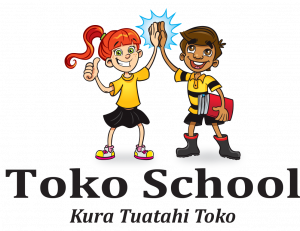 Home / About Us / History of Toko School

Our school is a well-established full primary school with six classrooms, library and school hall (built by the community in 1953).  With the ‘Tomorrows’ schools reform beginning in 1989 Huiroa School closed in 1991.  Remaining pupils moved to Toko School.  During 1992 the school completed a planned E.D.I (Education Development Initiative) with neighbouring Huinga School.  This was a first in New Zealand and was largely funded by the Ministry of Education.

The school is very well established, celebrating its 125th Jubilee during 2018.  It is set in most attractive grounds providing recreational and sporting facilities for families in the community both during the school week and during weekends.

Toko School has been noted for the academic, sporting and cultural achievements of its pupils over a large number of years and our goal is to ensure that all pupils achieve to their full potential.

The library was upgraded in 1999.  Originally it was the old Post Office in Toko Village which moved in 1980 to the school site.  In 2000 the school went through a substantial property upgrade of the hard court and parking area.  We have a lovely environment and work hard to keep it that way!  In 2009 a large, safe bus turnaround was developed.  In 2015 a roll growth classroom was added to the school and in 2017 the school hall was refurbished. In 2018 we celebrated our 125th Jubilee.